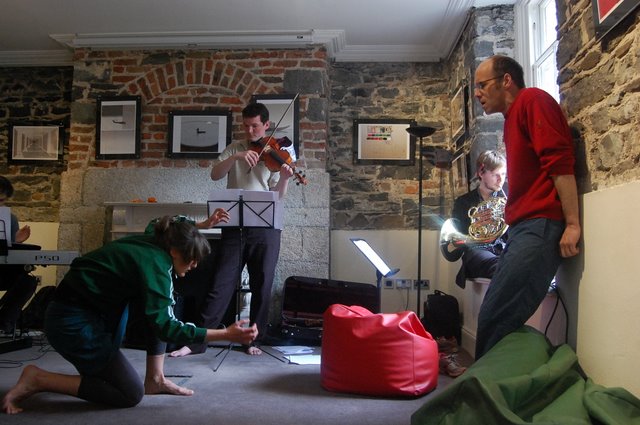 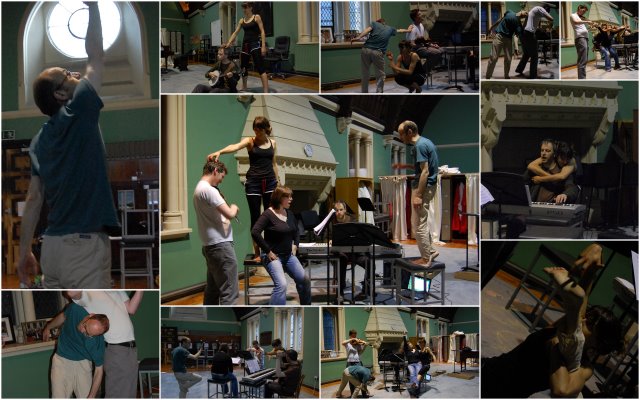 The open rehearsals are a group of professionally trained classical musicians/theatre artists who have come together to explore the possibilities of improvised music theatre. The music, which is improvised anew in each performance out of a pool of material provided beforehand, creates an environment which the actors feed off, creating largely wordless dramas of gesture and action. The actors and musicians are also given a pool of physical material to improvise around for each piece. The improvised nature of our work lends to each piece an uncanny sense of focus and unpredictability. The combination of music and theatre in one entity is more reminiscent of traditional artforms from around the world than of Western theatre: using physical theatre, masks, puppets and random text what we do is pitched on the boundaries between abstract music, text art and theatre.The group is David Bremner (keyboard, composer), Enda Collins (horn), Sandra Gonzalez (actor), Elizabeth Hilliard (soprano), Aidan McWatt (violin), Paul Nolan (actor), Andrea Scott (director/actor) 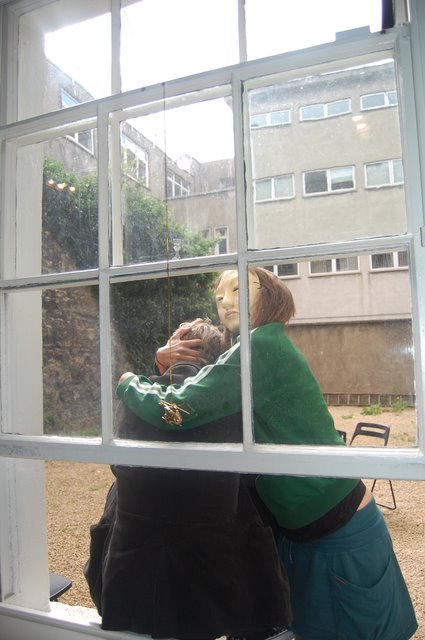 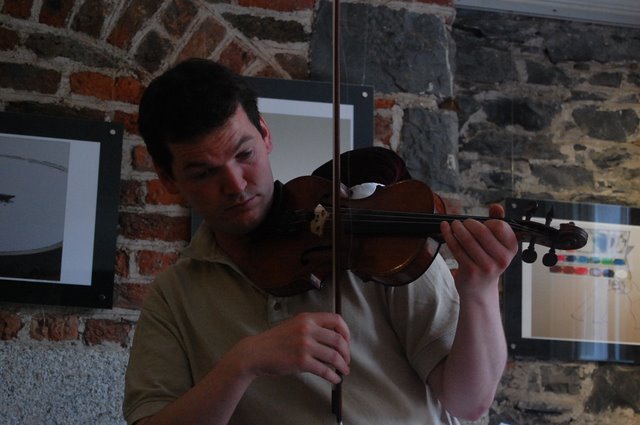 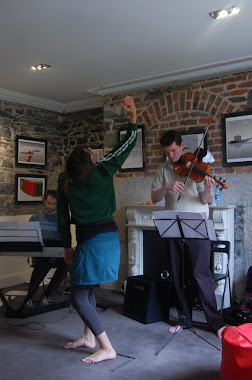 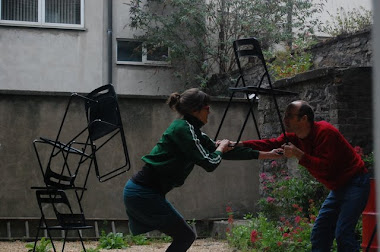 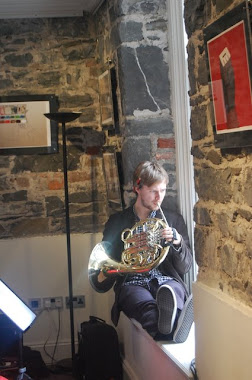 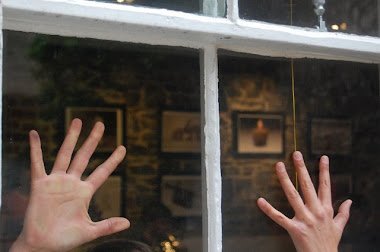 The Open Rehearsal's third gig in a series of four took place last night in the Crypt of Christchurch Cathedral. We have been using different spaces for this series of gigs. Last week's took place in the Centre for Creative Practices and the week before it was the Song School in Christchurch Cathedral. Each gig has been vastly different and unique.
The final gig in this series will take place again in the Crypt on Tuesday July 12th, 8pm. Don't miss it!
Posted by The Open Rehearsals at 11:27 No comments:

Email ThisBlogThis!Share to TwitterShare to FacebookShare to Pinterest
Home
Subscribe to: Posts (Atom)
ABOUT THE ENSEMBLE MEMBERS

David Bremner is a composer, organist and pianist based in Dublin. Originally from West Cumbria, UK, he moved to Ireland in 1999. He studied composition and electronic music with experimental Austrian polymath Karl Stirner, and has attended masterclasses with Michael Finnissy, Christopher Fox and Bogusław Schaeffer. He has attended the Irish Composition Summer School, and in 2007 was one of seven young composers invited to Seefeld in the Austrian Tirol to participate in the festival avantgarde tirol. He is currently completing a Ph.D in Composition at DIT Conservatory of Music and Drama under the supervision of Gráinne Mulvey, and is a member of the Irish Composers' Collective. He has had works performed by, amongst others, Ensemble ICC, Paul Roe, Elizabeth Hilliard, Dublin String Quartet, Hilltown Ensemble, Milltown Chamber Choir and avantgarde tirol. Through these performances he has become recognised as a lively figure on the Dublin composition scene, always willing to take risks in the exploration of new ideas. Interests include improvised process music and the rhythmic implications of spectral composition.
David is the co-director of the music company Béal, whose first event was a festival of new music and text in November 2010. His notated music is represented by the Contemporary Music Centre. In addition to composition, he has a busy career as a performer: he has played on piano or organ with many of Ireland's leading ensembles, including the RTÉ National Symphony Orchestra and Crash Ensemble, and is Assistant Organist at Christ Church Cathedral, Dublin.

Aidan began his studies at University College Cork, where he took a keen interest in acting while studying English and Music as an undergraduate there. He subsequently turned his attentions to classical string performance at the Cork School of Music and continued his instrumental studies at postgraduate level with Bruno Giuranna at the University of Limerick.Thereafter he moved to Dublin where he has worked since as a freelance musician and teacher, leaving aside a period from 2005-2007, when he embarked on a somewhat unexpected odyssey through the wilds of Canada (though considering he barely made it beyond the 49th parallel, anything remotely hinting at ''wild'' might be exaggerating things a bit. He never even encountered a bear. Though a cub did once wave at him as he drove through the Canadian Rocky Mountains. However, he is content with this sop to hyperbole).Most recently he has been very fortunate to play violin with the Irish Baroque Orchestra and also enjoys a bit of chamber singing of a Sunday. He also has a love of improvised music and is delighted to be a part of a group that places improvisation at the core of its work.

Enda grew up playing brass at the Blanchardstown Brass Band before continuing his studies at the Royal Irish Academy of Music where he graduated with a BA in Music performance in 2008. He has performed with the RTÉ Concert Orchestra, RTÉ National Symphony Orchestra, Dublin Philharmonic, Wexford Opera, Lyric Opera, Irish Film Orchestra, Irish Session Orchestra, Lombard Philharmonic, Anna Livia International Opera festival, Glasthule Opera Festival and has performed solo at the International Festival of Contemporary Music. He has played for Bill Bailey at The O2, Julie Feeney at Glastonbury Acoustic Stage, “The Doors” at Grand Canal Theatre, Jose Carreras at Killruddery House, Russell Watson at NCH, Katherine Jenkins at NCH and multiple operas and shows in the Olympia and Gaiety Theatres. Enda has toured China with Dublin Philharmonic and he performed at the China New Year Celebration with the Dublin Phil Brass Quintet. He has played for recording sessions in studios in Dublin such as Windmill Lane, Phonic Studios, Charthouse studios and RTE Studio One as has broadcast live on RTE Lyric FM, FM 104, the Late Late show & Tubridy Tonight. As an educator he has tutored wind and brass quintets for the Dublin Youth Orchestra and the Artane School of Music. He has taught Trumpet, French horn and Trombone for Bunclody F.C.J., Finglas Concert Band, Sutton Park School and St. Laurence O'Tooles. As a jazz pianist Enda plays for the Hot House Big Band, RIAM Jazz Ensemble & Midnight Swing. As a composer/arranger, he has written and recorded a film score for the film Chevalier directed by award winning film director Sean Branigan. He performs with chamber music ensembles such as the Irish Composers Collective, The Ottoni Ensemble and Dublin Winds. Enda loves Barbershop and sings in a Barbershop quartet called The Four Chords. During his musical studies he played with the National Youth Symphony Orchestra of Ireland, Dublin Youth Symphony Orchestra, RIAM Symphony Orchestra, RIAM Jazz ensemble, Irish Youth Wind Ensemble and Cyprus State Youth Orchestra.

Elizabeth Hilliard is a soprano, she is a member of the National Chamber Choir of Ireland and co-director of new music company, Béal. She is sings with many professional vocal ensembles in Ireland and is also in demand as a soloist. She is in demand as a contemporary classical recitalist, and has been invited to give recitals by the Irish Composers' Collective. She has sung with The Crash Ensemble, Irish Baroque Orchestra and Irish Chamber Orchestra. She is currently studying for her masters degree in Voice performance at the Cork School of Music in association with CIT. She is specialising in contemporary repertoire and is interested in exploring a more experimental side of music performance.

Last seen in No Irish, No Blacks, No Dogs at the New Theatre for Morton Films & Media Company. Paul’s many theatre roles include: Martin in The Goat (Duked Productions), Mark in Shattering Glass (Smashing Times), Neil Boyle in The Mundy Scheme (Tavistock Arts), Old Man in After Midnight Before Dawn (Silent Blade), Schigolch in Lulu at the Samuel Beckett Theatre, Klaus in La Corbiere (Group X), Bottom in A Midsummer Night’s Dream (Sycamore), Senchil in Portia Coughlan (Bluepatch Productions), Gerry and the Peace Process (Volta/Lane Productions), The Elder in Human Herd (New Theatre), Harry in Lost Weekend (Axis), Maitre Jacques in The Miser (Wonderland). Paul has appeared in several WB Yeats works with Dublin Lyric in the National Library. Film work includes: No Strings Attached, The Man in 301, Your Money or Your Life and Dad in Happy Birthday Timmy which won best Irish short at this year’s Foyle Film Festival. Paul trained at Focus Theatre under Mary Moynihan and at the Gaiety School of Acting.

Sandra (BA Hons) is a physical theatre performer, puppeteer, and puppet maker. She began her studies at the Jaques Lecoq School “Estudis del Teatre” in Barcelona. Upon graduating, she continued her studies at the Institut del Teatre, Barcelona, where she graduated in 2010 with a Master's Degree in Drama, specializing in physical theatre. She finished her Master’s Degree on an Erasmus programme at the Royal Welsh College of Music and Drama in Cardiff. Sandra has performed in Spain, Italy, the UK and Ireland and worked with many different directors such as Firenza Guidi, Andres Corchero and Alfred Casas. She moved to Ireland in the Summer of 2010, and since then she has worked with a wide range of performers and artists, including “Transversal” during the Dublin Dance Festival and ” Ticket to your Dreams”; a clown, circus and theatre show. Sandra has set up the Lokita’s Company in Dublin and their first project “Equipaje” is to be debuted in the Autumn.

Andrea Scott is Artistic Director of Act One Theatre School / Youth Theatre & Floating World Theatre and has worked as Associate Artist with Bluepatch Productions. She holds an MA in Theatre Directing from UCD and trained in Suzuki, Viewpoints and creative collaboration with Anne Bogart’s SITI Company in New York. Acting credits include Stevie in The Goat for Duked Productions, Woman in Ciara McMahon’s short film “I used to call it a gold, but it’s a platinum one, Platinum”, Faye in Memory Palace – a collaborative devised piece with Bluepatch Productions (Galway Theatre Festival 2010), Celia in Aisling’s Diary (RTE), Portia in Portia Coughlan (New Theatre), and Young Medea in Medea Redux (Bernard Shaw Beer Garden, Galway Theatre Festival 2009 & Smock Alley Theatre). Directing credits include Striptease for You and Me Productions in Focus Theatre, May 2011. A Midsummer Night’s Dream, DNA, The Chyrsalids, Totally Over You, and Multiplex all in Players Theatre for Act One Youth Theatre. A Midsummer Night’s Dream was also performed in Stephen’s Green Park as part of the Shakespeare Festival 2010. Floating World is a young theatre makers company focused on re-imaginings of classic texts and devising new work through creative collaboration. 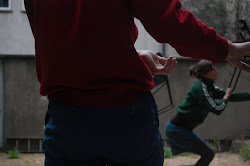 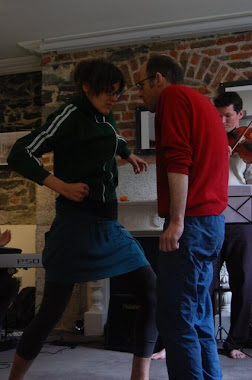 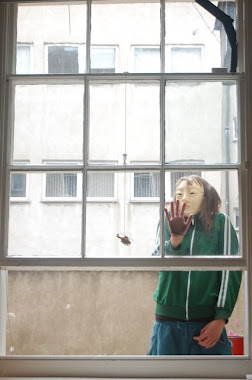